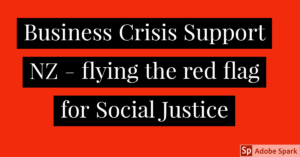 Try saying one of those statements to a business owner who has lost everything and see what reaction you get. On second thoughts don’t because they are already experiencing significant trauma.

Validation and hope lessens any stressful situation – but listening is the healer. We would like to share a recent experience on this topic . It is a  Mental Health warning to business owners:

Many of you in our local district (Whangarei) and business community know we do not post something publicly – without good reason .

There are plenty of local face group business support groups starting up in Whangarei  – featuring mainly advertising and/or promoting and the same business advice given precovid19 lockdown whe such advice compounded problems further, during and after the  Covid-19 lockdown.

On the ‘Northern Advocate’ facebook page recently I merely stated that a new group that fell into this genre, was not doing anything new because many were already doing it – even a group with a membership of 15,000.

One person from a different culture mentioned that they’d posted something to that new group and it was deleted, so they left that group.

Not long after that, I had to dodge a few bullets  – narratives – call them  what you will, from the facebook friends of the Administrator of that Group (as we were told later).

The continuous war cry was ‘you’re so negative.’ It seemed the ‘friends’ were bouncing off each other in a meelee of delight, having fun using me as their twidlee-dee toy, with a bit of gaslighting thrown in to disrupt any equilibrium.

Then, (figuratively speaking) – it was clear after hearing the ominous wok-wok sound of giant wings overhead – and the use of the word ‘f*ck being shouted at us in big letters – that I was now outnumbered, manoevred into submission and engineered into a  position of conformity, punishable by more of the same treatment if I continued having an opinion.

(How did this feel? Think communist China during Chairman Mao’s reign, and the little red book).

Next came what can only be described as being part of a military styled drill minus the request for name, rank, and serial number and a blinding light being shone in my eyes.

I gave the perpetrators the opportunity to explain why they made the comments they did online, etc.  This was met by either silence or a reminder that ‘you’ re so negative.’

The now small group were asking me questions with one of the Members wanting to prove to me and anyone else watching on this page, how remarkable their clairvoyant talents really were.

It went like this. They would ask me a question, and when I finished writing and posting my answer, they’d read it and then say they expected my kind of response.  A talented clairvoyant?

Putting on a “Debono” hat of positivity, I even said ‘Go well,’ often. And even ended each sentence with a “lol.”

With other projects to continue on with, I returned later to see selected posts have  been deleted. When I say selected, it was mine, the guy who complained his post had been deleted hence why he left that group, and the “….f*ck…” message.

I did not complain to the Northern Advocate admin,  neither was I intimidated by the collaborative emojis appearing on the comments made by each of these people, including the “…f*ck…” comment.

The herd mentality during this ‘one-act’ play may have been seen by most of the 30,000 Facebook page Members.

From the way the article was written – there is no mention of  lived experience, or training in significant trauma.

I believe insolvents won’t be helped as well as they could be, including ones who have lost everything including their own business and more.  I say this because their behaviour towards me acts as an indicator of future behaviour and conduct if you become a Member.

Other clues from the article indicate the number of facebook ‘likes’ on the page’ and  number of new members pending approval being important, along with the group goal being:  ‘aim to keep the group non-biased – so everyone can have a safe place to discuss…’

If people aren’t allowed to be themselves including sharing their thoughts honestly (as I did on this facebook thread),  it tells me that the whole environment will be inflexible,  controlled, and lacking empathy.   Continuous controlled positivity – where people aren’t allowed to express their true  feelings – at worse – denied them  –  is what’s known as toxic positivity.  A clearer way of defining it is -Dismissive positivity.

To be told to focus on one emotion (continual happiness/positivity) and being made to deny other human emotions such as sadness, grief, anger, hurt, etc is inhumane, barbaric, and goes against a person’s basic human rights.

My concern is how will people with significant trauma will  be treated by this group, including people from diverse ethnicities and communities.

We, Business Crisis Support NZ have worked on the frontline with business owners for nearly two years in various  crisis situations. All traumatic to the business owner  This was well before the Covid19 lockdown, and during it. Business owners don’t need this kind of resistance from a group. They need to be listened to and validated.

Good to see people planning and executing things. In some cases it looks as if they have been recruited as pawns for Northland Inc, etc to continue the status quo. Money (subsidies/funding) talks.

A new breed of ventriloquist’s  puppets are emerging and  propagating the same kinds of philosophies that have already caused extensive damage commercially to Whangarei and Northland pre and post lockdown. I have seen it with my own eyes. Many of us can see what’s happening here so we have decided to warn people. After all, it is also part of our job to do this.

The toxic positivity from any group working with traumatised people needs to be stopped head-on.  From my interactions with its members on the Northern Advocate Facebook page, they are intent on influencing people to not recognize reality in the same way that they are out of touch with reality – (preferring people to be happy,  positive, and not negative –  all the time).

Large numbers of (your own friends lol) on a facebook page mean jackshit.

Give business people real advice that’s going to stick this time so that next time there’s a huge business upheaval (and there will be), that systems etc put in place,  will be sustainable. Remember, whatever advice business owners got the first time round – never stuck.

To everyone else, take the time to exercise sound judgement before making any business decision,  by asking questions, researching, using deductive reasoning before making choices that you are comfortable with.

Moral of the story:

Don’t let  herd mentality push you around if you know something isn’t right. Speak up. Your actions will protect and help many. Don’t let people  confuse your common sense thinking and take control of you and your business, choices, or your life. If I can stand on my own two feet against a group of naysayers, you can too.

As at 15 May 2020 there have been four confirmed suicides during the lockdown – all business related. We pray for empathy and compassion.